WordsFlow, a plug-in for InDesign, combines the editing power of Word and Excel with the layout power of InDesign, adding its own dynamic linking and sophisticated merge technologies to supercharge your editorial and production workflows. 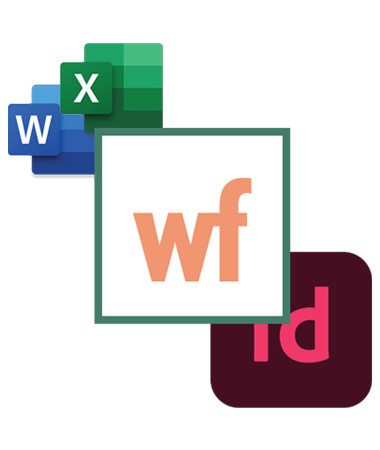 WordsFlow, a plug-in for InDesign, combines the editing power of Word and Excel with the layout power of InDesign, adding its own dynamic linking and sophisticated merge technologies to supercharge your editorial and production workflows.
With WordsFlow, you place Word documents and (Pro version) Excel spreadsheets as InDesign story contents normally, using the familiar place dialog.
But, behind the scenes, WordsFlow maintains a dynamic link so it can intelligently merge external document changes into the InDesign story contents on each link update, rather than just replacing the story. The Pro version provides a two-way link so you can push your InDesign story changes back to Word format.
So you can format, layout, and edit in InDesign, while your authors and editors continue creating and editing story content in Word and Excel, all without ever losing work.

The Pro version of WordsFlow adds two major features to give you a fully twoway workflow.
With WordsFlow Pro, you can push updates from any InDesign story to its linked Word document. This way, you can keep your collaborators working with the latest InDesign content, in their own editing environment.
Additionally, the Pro version can export original InDesign story content in Word DOCX format, auto-linking to the result. So you can now take existing InDesign content - however it was produced - and push it out in Word format for further editing and revision, to be shared with your collaborators. As they make additions and changes to the exported document, you can pull them in with a normal WordsFlow story update, usually with just a double-click.
One happy side-effect of WordsFlow Pros two-way capabilities is the availability for the first time of full, modern DOCX export for InDesign stories. Before, your export options were limited to using RTF or other half-way solutions.

The Pro version of WordsFlow also works with imported Excel spreadsheet files as well as Word files. You can place a spreadsheet file, then format columns/rows or individual cells, etc. in InDesign. Later, if you or someone else makes changes to the original spreadsheet, including moving around rows or columns, WordsFlow will figure out what changed, and merge in the changes without losing the formatting and edits youve made in InDesign.
WordsFlow Pro doesnt support two-way workflow with Excel documents, for now. But we call it a one and a half-way workflow, since you can work on both sides simultaneously.
Weitere Infos
Downloads aufklappen
Menü schließen
Weiterführende Links zu "WordsFlow Pro for InDesign Subscription (Miet-Lizenz) - 12 Monate"
Voraussetzungen
mehr
Menü schließen