DocsFlow, a plug-in for InDesign, for the first time combines the collaborative editing power of Google Docs with the layout power of InDesign, adding its own dynamic linking and sophisticated merge technologies to supercharge your workflows. 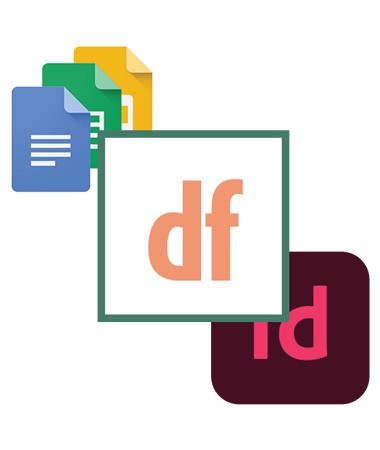 Using DocsFlow means you need no special resources to build, maintain or learn the editorial side, which is just Google Docs. It means zero cost per editorial seat, which again is just Google Docs. It means no limits to how many people are collaborating online, or to how many documents you use in your workflow.
It also means no learning curve on the design side, since DocsFlow builds on the native InDesign story linking and story updating machinery youre already using for graphics.
And getting started couldnt be easier: just download and install the plugin, and start placing documents with DocsFlow > Place from Google Docs.
Magic merge-update
If DocsFlows first breakthrough is to make it possible to link to Google Docs directly from InDesign, DocsFlows second breakthrough is deep merge technology that enables you to edit both the InDesign story and the Google Docs document independently, without losing work on either side.
DocsFlow Links panel LivingWhen the Google Docs document is edited, DocsFlow will notice fairly quickly, and ask InDesign to change the links status to modified, which shows up in the Links panel (a yellow alert icon, as shown here). When youre ready, you can update the story from Google Docs using the normal link-update invocations, such as a double-click on the icon.
As the link update starts, DocsFlow kicks in. Instead of letting InDesign replace the linked story wholesale, it applies a complex algorithm behind the scenes to merge the changes made to the external document since the last update into the current InDesign story contents (and to detect any conflicts). We call this the magic merge-update, since it seems like magic the first times you see it working. Its this magic that saves you from endless error-prone manual merging.
After each update, if you open the story editor with change marks showing, you can see who changed what, and how those changes fit in (or not) with the local story edits. DocsFlow also leaves InDesign notes at each point of conflict to let you know you may need to resolve something.

About that time machine

With its dynamic linking and merge-updating, DocsFlow enables powerful new workflows.
Instead of the usual file-based editorial workflow patterns where people throw Word files over the wall (though see our WordsFlow product for help in that case), you can now have authors and editors maintaining their story content in Google Docs, live-linked to the corresponding InDesign stories. When the content maintainers make changes to the story content online, the production folks can merge-update via the DocsFlow links to bring in the changes at the appropriate time. That way, authors and editors can work in parallel with production layout and formatting, giving you a virtual time machine.
For examples, think of a newspaper or magazine on deadline dealing with fast-breaking story updates, or, more long-term, a corporate or educational publication with multiple departments updating their respective sections regularly, or a quarterly financial prospectus assembling reports from various departments.

The Pro version of DocsFlow adds two major features to give you a fully two-way workflow.
With DocsFlow Pro, you can push updates from any InDesign story back to its linked Google Docs document. This way, you can keep your collaborators working with the latest InDesign content. And using the same magical 3-way merge technology used for an import merge, DocsFlow merges your InDesign changes into the Google Docs content on update; further, while doing so, it does its best to keep your Google Docs formatting intact, to minimize jarring styling changes.
DocsFlow Export menuAdditionally, the Pro version can export original InDesign story content to create a new Google Docs document. So, for example, you could assign a newly created story to be fleshed out or further edited by exporting it to Google Docs, and from there, sharing it with your authors or editors. As they make additions and changes to the exported document, you can pull them in with a normal DocsFlow story update, usually with just a double-click.

The Pro version of DocsFlow also works with Google Docs spreadsheets. You can place a spreadsheet, then format columns/rows or individual cells, etc. in InDesign. Later, if you or someone else makes changes to the original spreadsheet, including moving around rows or columns, DocsFlow will figure out what changed, and merge in the changes without losing the formatting and edits youve made in InDesign.
DocsFlow Pro doesnt support two-way workflow with spreadsheets, for now. But we call it a one and a half-way workflow, since you can work on both sides simultaneously.

If you use the Google Drive file system extension in Mac OS or Windows to access your documents and spreadsheets, you can place any Google Drive file by simply dragging and dropping it from the Finder or Windows Explorer into InDesign. DocsFlow will intercept the drag and drop and treat it like a Place from Google Docs. This gives you the benefit of system folder navigation in your Drive files when placing, if you have a lot of documents or folders (which would otherwise be challenging to navigate or find via the normal DocsFlow place dialog).