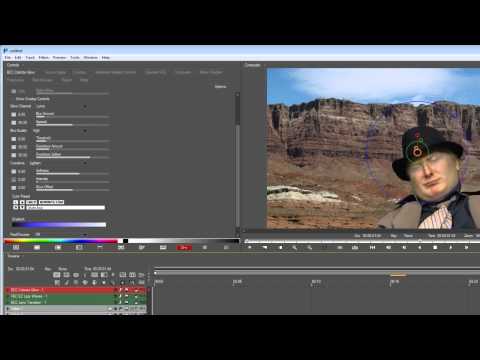 With realistic lighting, advanced keying and color correction, image restoration tools, compositing, DVE, vector paint, and support for third-party After Effects filters, Boris FX is a great value for effects creation in your video editing software. Vector paint and spline tools allow you to create animatable masks and transitions. A built-in Library Browser is packed with high quality pre-made effects, and with over 220 filters from Boris Continuum Complete and Final Effects Complete, Boris FX gives you a comprehensive image processing filter suite. Create your own unique looks or draw from a vast library of presets and styles.

Over 220 Filters from Boris Continuum Complete and Filter Effects Complete
User Interface Improvements
User Interface and Workflow Enhancements include ergonomic, drag-and-drop panels and a curve editor for smooth parameter animation. In addition, many of the included Boris Continuum Complete and Final Effects Complete filters include a new Compare Mode feature that lets you compare the filtered result with the unfiltered source via either a side-by-side view or a live split-screen view.

New Electronic Help System
A brand new fully searchable electronic help reference system has been added to FX, meaning that you spend more time creating effects and less time figuring out how to do it.

All New BCC Filters With Custom Preset Manager
The original filter effects in FX have all been replaced with the more powerful filters from the Boris Continuum Complete package and the number of effects filters that ship with FX 9 has been increased to a total of 115. The list of filter effects includes blurs, particles, glows, distortions, volumetric lighting, film effects, keys and matting, and procedural generators such as snow, rain and clouds.

FEC Filters
Several filters from the Final Effects Complete package have been included with this latest release of FX. Use FEC Hair to make shapes appear to grow hair along the edges, or FEC Drizzle to make the image appear as though it was reflected in a puddle of rain. FEC Glass can be used to make an image appear to have been cut from glass. Generate kaleidoscope magic with FEC kaleida. Create organic dissolved with FEC Blobbylize.

Static Generator for Sony Vegas 7
Users of Sony vegas 7 will now be able to use FX as a static title generator, meaning less rendering and faster effects creation.

16 Bit Color (host dependent)
16 Bit deep-color provides the user with the ability to generate smoother gradients and more precise color correction via an expanded color palette, which expands the available color gamut from 16 million in 8 bit color to trillions of colors. The result is that gradients are far less prone to mach banding or color stepping. 16 bit color in FX is host dependent and will only work in hosts that support this feature, such as Avid systems.

Unlimited Layers of Media
FX includes the ability to create unlimited layers of media of any size, which can be used to generate complex composites using the many apply modes included on each layer. Multiple apply modes can be mixed to generate unique effects. Layers can be masked with the built-in pixelchooser matting and masking system or by adding spline based garbage mattes. The masking system in FX features both upstream and downstream masking, making this a very flexible compositing system.

Oversize Image Import for Pan and Scan
Import image based media of any size into your editing timeline using FX and animate the position and scale of the layer to create smooth pan and scan documentary style effects.

3D Shapes such as Cylinders, Spheres and Cubes
FX includes the ability to map generated text onto 3D objects such as cylinders, spheres and cubes. These objects can be manipulated in 3D space with controls for camera, lights and motion blur. Each of the objects has it's own unique features, such as the ability to disassemble a cube over time or unwrapping a cylinder or sphere over time. Create bouncing balls mapped with video, cylindrical video tunnels or spinning video cubes with ease and speed.

3D User Modifiable Spline Primitive Shapes
Several spline primitive shapes are included with FX and all of these shapes can be filled, stroked or even extruded into 3D objects. The extruded objects can also be reflection, texture and bump mapped for added realism. Every aspect of the shapes can be modified by the user; points can be added, deleted or manipulated just like any other bezier spline shape.

Gradient and Procedural Media Generator
Included in FX is a procedural media generator that is capable of generating smooth gradients with options for linear, contour, bevel, edge and revolve gradient styles. Every parameter of the gradient can be animated, including the gradient color and stops.

Motion Blur
Motion blur is built into every shape track in FX and is used to add a photo-real touch to animated objects. Motion blur can also be used on animated masks to match the natural motion blur recorded by the camera.

Audio Import with Scubbable Waveform
Video composites are more often than not accompanied by audio sound cues like a pop or splash. FX enables users to import scratch audio tracks and the visual cues from the waveform monitor in the timeline helps users to synchronize the video effect with the imported audio track. The audio track can be played with the effect preview and the timeline waveform can be scrubbed to ensure correct synchronization of the audio and video.

Vector Paint System
The vector paint system in FX can be used to generate 2D geometric shapes which can be used as a graphic element in your composition or as part of a mask track. The style palette can be used to apply beveled edges to filled or stroked paint. The motion tracker can be used to automatically lock the position of a paint stroke to moving objects in the image clip.

Motion Tracking, Stabilization and Corner Pinning
FX includes tools such as 4 point motion tracking with sub-pixel accuracy, 2 point image stabilization and 4 point corner pinning. The motion tracker can track an object over time and then apply the recovered motion to a second object, such as paint, to lock the movement of the paint to the motion of the object in the clip. Image stabilization is used to remove unwanted camera shake from a clip and the corner pinning function enables the user to accurately and easily pin one image clip to another image clip with perspective distortion.

Support for 3rd Party AE Plug-in Filters
Most filters 3rd party After Effects filters can be used in FX, and thereby the editing system into which FX is plugged into making it easy to use some of your favorite AE filters in the host editing environment. A complete list of the supported filters is available on the support section of the BorisFX web site.

Over 115 Filters Effects Including Several FEC Filters
FX ships with over 115 distinct filter effects from the Continuum Complete product. Also included are many filter effects from the Final Effects Complete product. Each of the included filter effects has a built-in preset manager, which can be used to load any of the 1000 + filter presets designed to ease effects creation. The preset manager can also be used to save out custom favorite filter effects settings, which can be shared across networked environments. Each filter also includes the pixelchooser masking and matting system and a built-in motion tracker.

Hardware Accelerated OpenGL Previews
FX takes advantage of the built-in OpenGl libraries included with most video cards to accelerate the preview of effects on screen. Although the level of OpenGl support does not extend to rendered output files, this feature speeds compositing and effects generation making on-screen previews immediate, especially useful when dealing with 3D elements.

Library Browser with Hundreds of Preset Animations
The built-in Library Browser contains hundreds of preset compositions, all of which are user modifiable. Categories include animated shapes, filters and complex composites with PIP effects and 3D shapes. Users can save customized composition settings into the Library Browser for future retrieval and use on other projects.