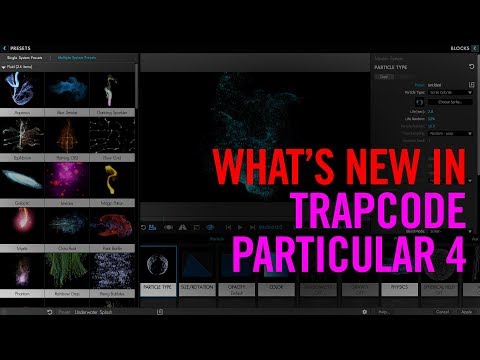 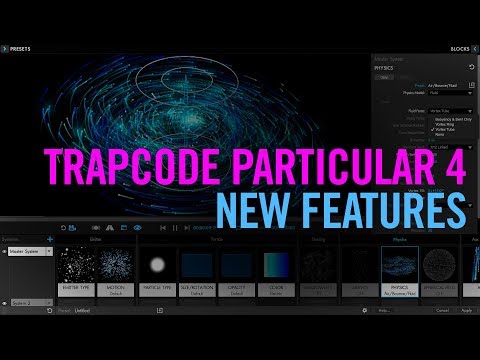 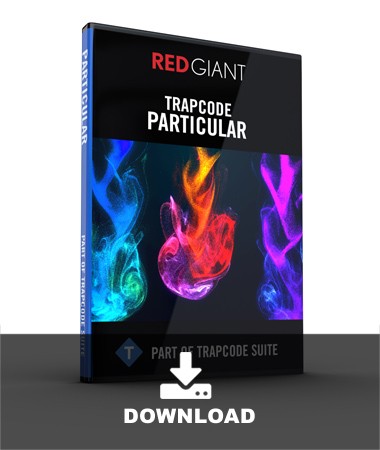 
Motion Graphics
Trapcode Particular is a plugin for After Effects that lets you add particles to your compositions to bring your motion graphics work to life. Use 3D objects for even more beauty and complexity.
Visual Effects
Create fire, water, smoke, snow and other organic effects. Combine multiple particle systems into one unified 3D space for visually stunning results.
Physics
For the first time ever, run realistic fluid simulations with the new Dynamic Fluids physics engine, or emulate particles moving through the air and bouncing off surfaces.
Designer
Trapcode Particular gives you the ability to build particle effects visually, with a powerful designer that makes generating effects more creative and intuitive than ever before.
Presets
Choose from over 335 Trapcode Particular presets, designed to give you a head start. Every preset is fully-customizable.

Designer (NEW)
Creating particle effects is easier than ever before, in the updated Designer. Add adjustable blocks with preset behaviors and styles for emitters, particles, physics and aux particles. Or add complete, customizable particle effects with a single click.
Fluid Dynamics (NEW)
Create dynamic, swirling effects with new physics options that allows particles to behave as if they are moving through real fluids. Choose from 4 customizable fluidic behaviors.
335 + Presets (NEW)
Hit the ground running with over 335 fully-customizable Designer presets. Particular 4 includes over 35 new presets that show off powerful features like fluid dynamics and more. Explore the library to find beautifully designed effects for creating fluids, fire, spaceflight, fireworks, muzzle flashes, explosions, smoke and more. Save your own presets, and share them across your facility.
GPU-Accelerated
Get fast feedback with Trapcode Particulars new GPU Acceleration through OpenGL. Depending on your system and setup, you could see speed boosts of up to 4X or more over previous versions.
3D Camera and Lights
Particular uses After Effects 3D Camera and Lights so you can fully integrate your particle Effects with your motion graphics and live-action vfx shots.

Multiple Systems
For the first time ever, explore endless creative possibilities when you combine multiple particle systems in the same 3D space. Create beautiful, complex effects through the interaction of different systems, all within one instance of Particular. Emitters in Multi-system setups can share parameter settings (such as turbulence, gravity and more), and can be saved as a single preset.

OBJs as Emitters
Give your particle systems a new dimension by using 3D models and animated OBJ sequences as particle emitters. For added flexibility, you can choose to emit particles from the vertices, edges, faces or volume of your OBJ file. Choose from Particulars library of over 60 OBJs, or easily load your own models using the new OBJ Loading Panel directly in After Effects or within the Designer.

Sprites and Polygons
Use any image in your composition as a particle by assigning it to a 2D sprite or textured polygon. Particular 3 now includes over 270 still and animated sprite images, easily loaded directly within After Effects or in the Designer via the new Sprite Loading Panel.

Lighting and Shadows
Shade all particle types from lights in After Effects. Shading can emulate light falloff, and Shadowlet rendering can cast shadows on both main and aux particles.

Bounce and Physics
Move particles organically through the air, or bounce off of other layers, with Particulars physics engine. Includes wind, gravity, turbulence controls and more for simulating complex, realistic motion.

Reflection Maps
Create dynamic color changes in your textured polygon particles by using layer as a reflection map. Add glints to particles as they rotate in 3D.