Red Giant Trapcode Suite is a set of 11 tools for 3D motion graphics and visual effects. 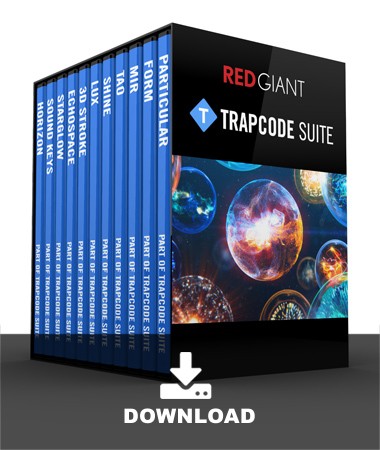 The industry-standard package for motion graphics in After Effects.

Red Giant Trapcode Suite is a set of 11 tools for 3D motion graphics and visual effects.

Trapcode Suite includes a physics engine with powerful behaviors, forces and environmental controls. Particular brings particles to life with new flocking/swarming and predator/prey behaviors, and adds more realism with combined bounce and air physics. Particular and Form both include the ability to create organic fluid simulations where particle systems interact with beautiful results.

Create flowing surfaces, mountainous terrains, endless tunnels, and abstract shapes. Use paths and motion to generate beautifully complex geometric shapes, ribbons and extrusions. Whether you are creating motion graphics or visual effects, the possibilities are endless.

Bring light and life into your motion design. Simulate organic, 3D-camera aware volumetric lighting. Use masks and paths to add light streaks that can bring your logos and text to life and add starry glimmers to accent the highlights in your work.

Use audio to generate keyframes that drive animation and effects. Scale, rotate and move to the beat, or use drum hits to create particle effects. Duplicate and offset layers and their motion with ease. Trapcode Suite gives you the power to automate complex animation easily.

With a subscription to Red Giant Complete, get even more 3D geometry input options thanks to integration with Cineware .c4d files. Bring C4D file geometry into your projects as Particular emitters, Form particle objects and Mir 3D models, including animation, normals, texture coordinates and transformations.

Thanks to Cineware, both Trapcode Form and Mir now include Cinema 4D input, which works in different ways, since each plug-in has a different function.

Create 3D terrains, objects and wireframes in After Effects

Thanks to Cineware, both Trapcode Form and Mir now include Cinema 4D input, which works in different ways, since each plug-in has a different function.

3D geometries animated along a path

After Effects Lights Made Visible

Organic 3D Shapes and Lines from your masks

Stylized glints and glows for motion graphics and text

Infinite Backgrounds for After Effects 3D

IMPORTANT NOTE: Not all Trapcode Suite plug­ins support Premiere Pro. The following plug­ins work in both AE and PPro: