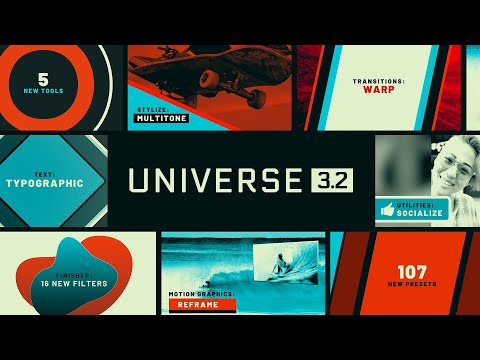 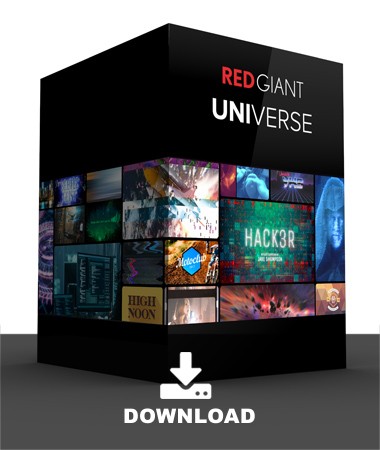 Build fast, unique transitions with little or no work. Add glows and other effects that give you better results and more shortcuts, options, and control than anything in your host app.

Every tool in Universe includes presets to help get you started and give instant professional results.

Multitone Stylize your image by using a colorful duotone or tritone effect.

Numbers Render and animate a wide variety of numbers, including currency, percentage, date and time.

Screen Text Fill your screen with scrolling code to create the look of an old-school or modern computer terminal.

Glitch Get the look of compressed, glitched video.

Holomatrix II Give your footage the look and distortion of a sci-fi hologram, digital display, and more.

Finisher Finisher makes it easy to dramatically improve the image quality of your DSLR footage.

Logo Motion Instantly add dynamic animations that bring your text and logos on and off screen.

Retrograde Transition A transition that uses real scans of 16mm and 8mm film to create an authentic film strip transition.

VHS Transition A transition that mimics the effect that occurs when a VCR has been used to record over pre-existing footage.

Carousel Transition A transition that mimics advancing to the next slide in an old slide projector.

Channel Surf A transition that mimics the distortion youd get by changing the channel on a cathode ray tube TV.

Flicker Cut A transition that rapidly cuts between two clips or a solid color, and which can invert the clips or add fades.

Retrograde Retrograde gives your footage the authentic look and damage of old 16MM and 8MM film.

Glitch Transition Transition between footage or text with the look of compression glitches and compressed data.

Color Mosaic A Transition that overlays a variety of colors in a mosaic pattern as it transitions between 2 clips.

Shape Wipe A transition that uses an ellipse, rectangle or star shape to move between 2 pieces of footage. Includes control over points, size, stroke and fill.

Linear Wipe A classic linear wipe with the addition of wipe mirroring, as well as an inner/outer stroke with glow on the wipe border.

Clock Wipe A classic radial wipe transition with feathering and the option for a dual clock wipe.

Channel Blur A transition that blurs each of the RGB channels separately for a unique chromatic effect.

Camera Shake Transition A transition that mimics camera shake while it transitions between clips.

Line Create an animated straight or curved line between two points, with elements that move along that path for flights, tours, maps and more.

Long Shadow Apply a colored, long shadow to your text, logo, or shape.

Luster Give your text a slick 1980s retro look. Luster applies a metal sheen to text layers to get that glassy simulated 3D vibe.

Overlight OverLight is a lens flare and light leak texture plugin that makes it easy to apply washed-out glows and lens flares to your footage.

Title Motion Create text and shapes and then instantly add dynamic animations that bring it on and off screen. Great for titles, lower thirds, callouts and more.

Halflight A library of optically-captured, highly customizable light leak transitions that give your footage a moody and filmic look.

Texturize Give your footage and text a Walking Dead-style grungy textured treatment. Seamlessly tiling textures make it easy to bring depth to your video.

Heatwave From VinhSon Nguyen of CreativeDojo.net, Heatwave is a rippling heat distortion effect, with controls for intensity, direction, speed, and more.

Exposure Blur Transition A transition that blurs footage while bumping up the exposure to create a dynamic blend.

Knoll Light Transition A transition that uses animated Knoll Light Factory flares, with 31 unique presets to quickly move you from shot to shot.

Unmult Create an alpha channel for any image or video shot on a black background. Useful for compositing fire, smoke, water and more.

Point Zoom Zoom blur with added glow to create a holographic projection look when applied to text or images. Create the illusion its coming from a light source.

Glimmer Create colorful glints and animated twinkling effects at the bright areas of your image for beauty shots, titles, music videos and more.

Swish Pan Mimic a fast camera swish pan movement while blending from one layer to another. Choose from directional options and control the exposure.

RGB Separation Separates and offsets the RGB channels in an image. Controls adjust the radius, scale and angle of the channel separation, as well as distortion.

Spectralicious Transition Create a 6 point color map from your A and B footage and uses the colors to transition between the two with 23 animation style options.

Edge Glow Create a glowing effect on the edges and outlines of images perfect for titles and logos with controls for glow, brightness, saturation, and tint.

Grain16 Real 16MM film grain to add to your footage.

Glow A diffused glow that softens the bright parts of the image. Isolate a specific color within your footage and apply a glow to just that color.

ShrinkRay ShrinkRay is a fast and easy way to make big things look tiny by simulating a tilt shift effect.

Turbulence Transition A luminance-based transition effect, with a dissolve driven by an adjustable fractal gradient.

Prism Displacement Distort and displace the pixels in your image with a prism-like, chromatic effect based on the luminance values of another layer.

Diamond Wave A 3D Transition that divides the layers into diamond shaped segments which rotate in an offset fashion revealing vertically or horizontally.

Blinds A 3D Transition that divides the layer into sections which rotate in an offset fashion vertically or horizontally revealing the 2nd layer of footage.

Color Stripe A transition that uses layered blocks of color wiping across the screen to reveal a second layer.

Cube A 3D Transition that places the layers onto the sides of a cube which rotate right, left, upwards or downwards revealing the 2nd layer of footage.

Unfold A 3D Transition that moves the top layer out of the frame in a chosen direction while the 2nd layer unfolds itself out moving right, left, up or down.

Soft Edge Wipe A linear wipe transition with an adjustable feathered or stroked edge. Used for transitioning between two layers of footage using a subtle blend.

Inside Cube A 3D Transition that places the layers onto the sides of an inverse cube which rotates right, left, upwards or downwards revealing the 2nd layer.

Triangle Wave A 3D Transition that divides the layers into triangular segments that rotate in offset vertically or horizontally revealing the second layer.

Rubix Cube A 3D Transition that places the layers onto the sides of a 3D cube which rotates segments of the cube right, left, upwards or downwards.

Picture in Picture Easily composite and frame one layer of footage over a larger layer. Includes the ability to add and customize a colored border and drop shadow.

Compound Blur A tool that blurs pixels based on the luminance values of another layer.

Dolly Fade A 3D transition that moves the second layer in z-space while fading in the opacity of the layer over the first layer.

Spot Blur Blurs the area of the frame inside or outside a rectangle, ellipse and other shape presets, or from your own custom shape.

Fold A 3D Transition that folds the top layer in half onto itself while unfolding the 2nd layer out moving right, left, upwards or downwards.

Slide A 3D Transition that slides the layer away right, left, upwards or downwards revealing the 2nd layer of footage.

*Prism Displacement, Compound Blur, and Picture in Picture are not supported in Avid Media Composer
**This plug-in will not work with any version of DaVinci Resolve from the Mac App Store