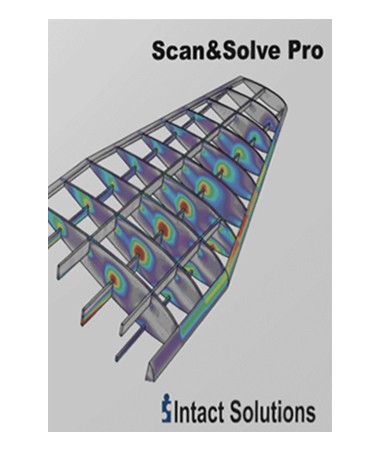 Beschreibung Weitere Infos Voraussetzungen
Beschreibung
The academic version of Scan&Solve Pro for Rhino provides all the functionality of the... mehr
Menü schließen
The academic version of Scan&Solve Pro for Rhino provides all the functionality of the commercial version at an affordable price for students and educators. However screen images and reports will clearly indicate that the academic version is not suitable for commercial use. The usage terms are similar, but not identical, to the academic license usage for Rhino.
Simulate Early, Simulate Often... In Rhino
Scan&Solve for Rhino for Windows completely automates basic structural simulation of Rhino solids. Unlike other analysis tools, no preprocessing (meshing, simplification, healing, translating, etc.) is needed.
Scan&Solve is built on a patented meshfree technology that liberates Finite Element Analysis (FEA) from the dependence on and limitations of meshing. The salient feature of the technology is separate handling and controls of geometric and physical computational models that are seamlessly combined at solution run time. The advantages of this approach include unprecedented flexibility in handling geometric errors, small features, complex boundary conditions, and interfaces, while maintaining most of the benefits of classical finite element analysis.
Scan&Solve Pro extends the power and simplicity of Scan&Solve for Rhino to bonded heterogeneous multi-material structures made of complex anisotropic materials such as wood, bent laminates, and composite structures. Scan&Solve Pro incorporates many other advanced features, including multiple simulation scenarios and improved layout.
In Rhino, simply: